A new research paper featuring B-GOOD partner and WP5 leader Prof. Christopher John Topping was recently published in the journal Nature Communication, and sheds light on the pesticide effects on honey bees. The publication titled "A deeper understanding of system interactions can explain contradictory field results on pesticide impact on honey bees", puts forward a research, explaining the contrasting field results regarding the harm of toxic compounds on honey bee health and colony stability, assessing the effects of various factors. 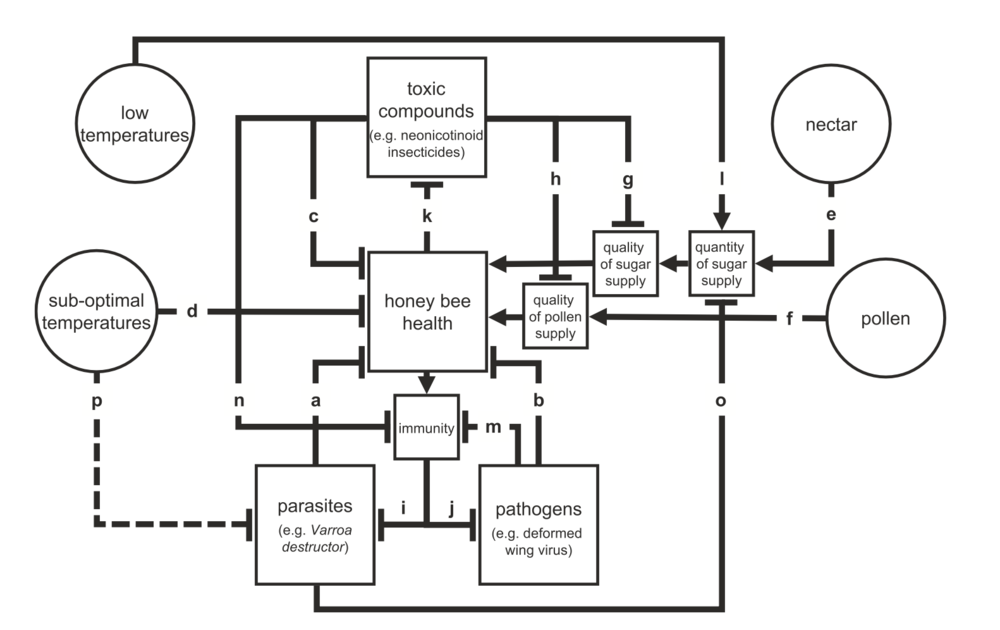 The health of honey bees as influenced by multiple factors and their effects.

To gain a mechanistic understanding of the processes underlying the contrasting field results regarding pesticide harm to honey bees, researchers adopted a systems biology approach in their recently-published research. Based on theoretical and computational parameter-free methodologies, they focused on the structural properties of the biological system under study, which exclusively rely on the architecture of the system and are independent of the strength, which is often unknown, of each interaction (i.e., any relationship between two components of the system). The predictions produced from the modeling analysis were then put to the test in real time using caged honey bees.

The  paper shows that the impact of toxic compounds on honey bee health can be shaped by the concurrent stressors affecting bees. Honey bees under similar initial conditions can experience different consequences when exposed to the same stressor, including prolonged survival or premature death, which can generate an increased vulnerability of the hive to dwindling and collapse. These conclusions could have important implications for the application of field studies to complex systems.